Social Media At ILTA: Sharing and Collaboration Explodes at Conference

Four years ago, Kevin O’Keefe contrasted the social media activity that had already become prevalent at most technology conferences with the relative lack of such activity at the International Legal Technology Association conference. He noted some improvement in 2008, and in past years only a few sessions mentioned either social media or secure collaborative software.
This year ILTA conference saw an outpouring of social media activity in many different channels. Social media tools were embraced by the association itself, by conference co-chairs, by vendors, and by peer attendees.

There is still room for increased adoption and smart use of these channels (such as a more friendly and effective pre-conference wiki platform), but I believe that the benefits of social media to people who attended or who followed from afar were great, and that the refindability and reusability of all this content will continue to benefit ILTA members and the legal technology industry.

Tweeting In The Halls

Perhaps the most visible change from previous years was the formalization and much broader extent of Twitter use. It was professional, not personal I’m-eating-a-sandwich tweeting. In addition to the #ilta10 conference hashtag, each session had a formally identified short and useful hash tag such as #km2; in some sessions as many as four or five people were highlighting and sharing key thoughts through twitter.

Legalerswelcom used What the Hashtag to graphically show the tweeting by day; each day with educational sessions had over 700 tweets, and there were over 3,000 for the week. I reproduce a picture of it here, because the WTH service shows the previous five-day’s tweets and the week's view will not be available soon. 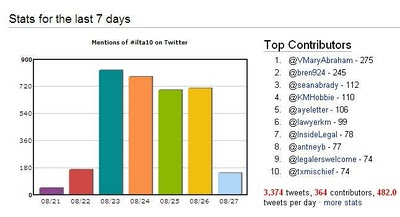 And this was despite the regrettable absence of Jenn Steele, one of the twitter champions of previous conferences.
While it is essentially impossible—despite Mary Abraham’s impressive wireless keyboard-and-iPad combination—to capture as much content through tweeting as one can while live-blogging, tweets were nevertheless adequate to get a sense of the session, and to identify many of the key takeaways. Session tweeting also allowed people running late to find out which ongoing sessions had good content matching their interests. It also in many instances led to interaction between tweeters, or amplification by “retweet” by conference attendees or even those overseas of especially interesting comments or developments such as Peter Krakauer’s description of the KIIAC semi-automated agreement assessment tool.

Vendors did tweet about events and offerings, and there were some fun twitter-based giveaways / contests, but as you can tell from the “top 10 tweeters” list from WTH, above, there was not vendor abuse of the conference hashtag in any serious way.* Certainly the two on the vendor/consultant front on the "top 10 list," Legalerswelcome and InsideLegal, were adding rather than taking away value from the online conversation. I hope that such an approach will continue.

Twitter generated face-to-face social interactions as well as on-line activity. There was an initial, formal tweetup on Sunday, and a less formal but also fun “#tweetup2” on Tuesday organized by conference attendees rather than the conference itself.
Sessions About Social Media Or Enterprise 2.0

On the educational side, a dozen sessions covered social media and collaboration topics including:

Live blogging was made feasible, after Monday, by the generally high-quality wi-fi at the Aria resort. The conference organizers were refreshingly up front about the problems before Monday evening. Conference setup included “Click Zones” that were really designed to limit typers to a certain part of the room (understandable due to the tapping), rather than provide power. I eventually learned to simply open up a side panel in the session rooms, but it would have been better (and safer) to have power strips with taped-down extension cords available in “Click Zone.”
In addition to these other Caselines posts, the following are some of the blog posts covering the conference:
Mike McBride has collected a number of conference posts at his Delicious account. I haven't tried to be comprehensive here--comments and additions welcome, of course. And the fact that it wouldn't be easy to be comprehensive is telling.
Videos and Podcasts
Vendors and consultants are leading the way in integrating video and audio content into conference.

Legal consultants ii3 professionally produced and made available hours and hours of high-quality video known as "ILTA TV," with chats hosted by Shy Alter. Day 2 for instance featured an interview with a visiting general, along with a discussion on KM supporting legal administrative departments with knowledge management attorneys Mara Nickerson, Rachelle Renegal, and a certain bass-voiced litigation knowledge manager (at about 120 minutes in).

Over at Legal IT Professionals, Christy Burke had a number of podcast interviews with a variety of vendors and peers broken down into Days 1, 2, and 3.

Kevin Hunt of Thomson Reuters also made a number of other podcasts, including a video interview of conference co-chair Meredith Williams; the post includes a link to interviews with Patrick DiDominico, Craig Ball, and yours truly.
I also made my first podcasts, releasing by Cinch (http://www.cinchcast.com/) a podcast about the initial tweetup and another short one about showing pictures of faces in Outlook and elsewhere based on a conversation with Mr. Alter. Cinch is a really easy way to record and share short audio recordings on the iPhone or over the internet.

*occasional exception aside.
Posted by Unknown at 4:09 PM

Wow. Interesting to hear your voice after all of these months.