My iPad and Me: Personal Technology and Live-Blogging 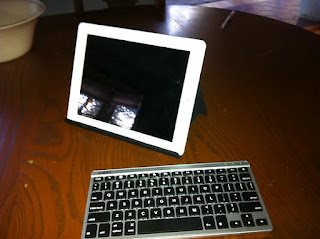 I live-blogged and tweeted at ILTA Conference from the setup shown.  It's a Zagg "Solo" keyboard and the latest iPad.  I thought those gadget-lovers out there might enjoy my thoughts on how these tools worked for me (the bottom line:  quite well, still some room for improvement in my approach). I think this kind of setup would also serve well in occasions when lawyers can't be plugged in, don't have much space to work in, or want to impress the less tech-savvy.

The keyboard came with a handy and effective stand for the iPad, which doubles as a carrying case for the keyboard. The keyboard is very light and easy to use. It works with iOS and Android devices via Bluetooth, so there aren't any cables cluttering things up. I've found it handy on occasion to have the keyboard located in a different place (e.g., lap) than the tablet. Setup was a piece of cake, although I recommend looking at the directions. It's a lot more comfortable working in cramped quarters on a separate keyboard than on a screen attached to a keyboard (i.e., a laptop).

The keyboard has a few shortcut keys that are extremely helpful on an iOS device--Cut, Copy, Paste, Home, and the like. I used the copy and paste for hashtags on tweets and over and over again while working on posts.

I'll have to remember that the keyboard itself has a battery. It it supposed to go a few weeks without needing a charge, so that may be a challenge.  It's recharged through a unique little USB cable, which I am nervous about losing.  You don't have to have the cable to type, of course.

The iPad (wifi only) worked great as a blogging and note-taking device.  The battery life is four to five times greater than my laptop, and the display looks fabulous.  I was able (barely) to get through an entire day of five sessions on one charge.

It's also great being able to touch a word or point in the document and have the cursor move there.

A word about the wifi.  If my experiences at the E20 conference and at this one is any indication, conference facilities appear to have figured out how to provide sufficiently reliable wifi.  Thanks Gaylord National and ILTA!  This was an essential aspect of working with the iPad so much, as I don't have wireless internet (3G) on it.

One challenge in live-blogging was figuring out how to write my notes down. I was liveblogging on the Blogger platform. I tried the native Blogger app but, perhaps not surprisingly for a Google tool on iOS it was A) for iPhone only and B) pathetic (did you know that people add "hyperlinks" to blog posts?  The Blogger app doesn't). I also tried working from a Safari browser window, but working with longer posts was not practical because the view would jump around too much.

I then tried using the iPad's built-in Notes app, which is great in that it instantly and permanently saves everything you write and looks good while you are writing. The Notes app, however, gives you almost zero control over fonts or appearance, no bolds or italics even, and it doesn't allow for bullet lists or hyperlinks, common weapons in a blogger's arsenal.

The Notability app on which I'm typing this up solves the font and appearance issues, at least as far as the document on the screen, and also instantly saves whatever you write. It has the ability to embed hyperlinks, but it doesn't copy over into Blogger as HTML, so those get lost in the transfer. Close enough though!

Notability is designed for iPad, which means that you can click an icon and "scribble" on the screen with your finger. I used that feature, for instance, in taking down a draft of the comparison table in the Exemplify review.

The WordPress apps look great, but, for better or worse, Caselines is still on Blogger.

Poking At The Screen

Editing longer posts once they left Notability still required going to a laptop and opening up a browser.  After working on the iPad for several days, I had gotten used to the touchscreen, and would swipe ineffectually at the laptop screen where I needed to edit next (this left me feeling like Scotty (James Doohan, RIP) on Star Trek IV).

We get used to working with a mouse, and, yes, mousing is more accurate than a finger swipe, but words aren't small targets, and touching something on the screen is simply a lot more intuitive and requires less brain power than maneuvering a cursor. Touch screens are definitely coming to the enterprise--even Microsoft is paying attention to them.
Posted by Unknown at 10:44 AM