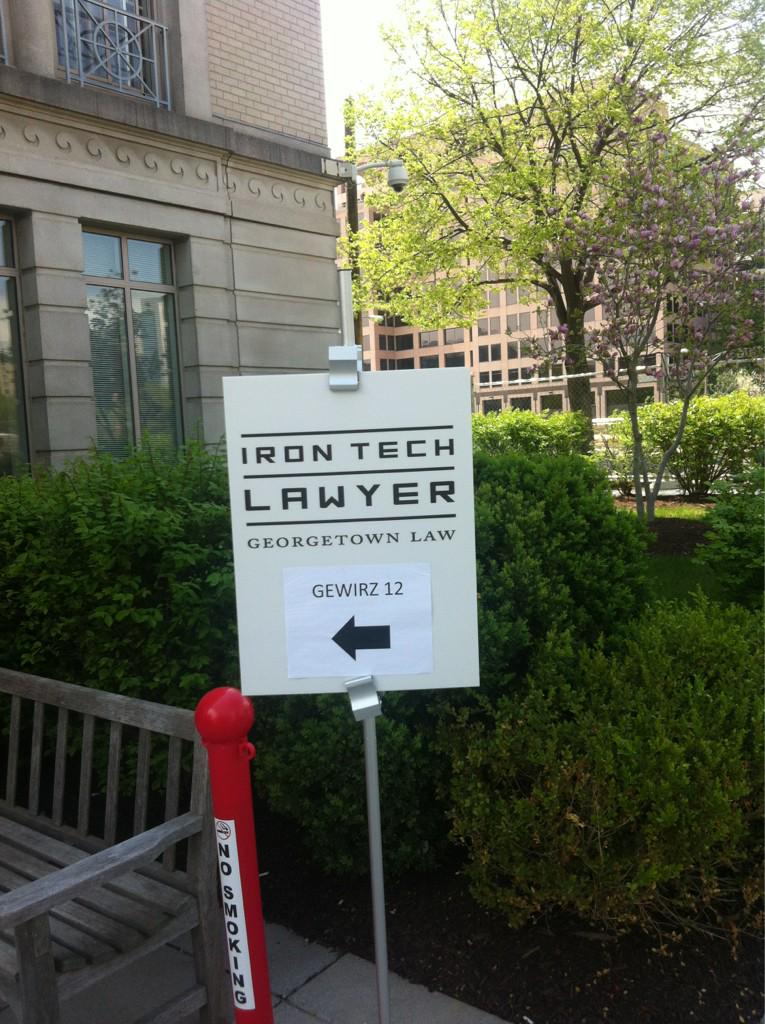 I attended the full Iron Tech Lawyer competition on Wednesday and then spoke at (and attended most of) the first conference put on by the Georgetown University Law Center in conjunction with the ABA Journal, titled “From Revolution to Evolution—Digital Tools in Law Practice”.

I have previously covered the Iron Tech Lawyer competition; in essence, it is an app development contest targeting a legal services-type challenge. What’s great about it is that the students get to address client problems by combining their legal reasoning and analysis with advanced technology. The technology (provided by Neota Logic) is sophisticated enough to be able to embed a big chunk of their legal understanding, but simple enough to develop and use that they can provide a web-based app that actually could be useful.

I was intrigued this year by the different strengths and approaches shown by the six teams (of three or four students each). Some teams did a great job at identifying a clear user need that could be met by an app, or had carefully teased out a coherent use-case for their solution; some had thought carefully about what sort of design would be a good fit with what their users needed, or perhaps designed their app while thinking about and preparing for its further development; and some had developed a strong, coherent presentation or showed strong presentation skills.  The subject matter ranged from Native Alaskan tribal child protection issues to federal disability rights to California elder law.


All of them were able to get remarkably far in the 10 weeks or so that they had to develop the app; if it is any consolation to them, they should know that any kind of significant, enterprise IT project takes significantly longer than the time they had in class.


The judges evaluated and questioned the students about how they teased out the user / client needs, or identified the client population; how they learned about the underlying law and built it into their applications; and also the type of output or result that could be obtained.
Details on the six apps, also described here, follow.
ADA2GO


The first team’s Americans with Disabilities Act app focuses on Title III, relating to accommodation of individuals with disabilities in the provision of public facilities.  Examples include restaurants, hotels, salons, and bowling alleys.
It is targeted at both individuals not aware of their rights and businesses not aware of their obligations. They tried to focus on the needs of their disabled users, making sure for instance that the app would work with screen-readers.


They started with a potentially discriminatory situation rather than a venue. Tried to provide context-specific examples. Hover-overs provide definitions and examples.  The app also connects to the correct Department of Justice area. After answering a series of questions, the users are provided a final report, which can be in .pdf form. It provides a description of the users’ rights and responsibilities.
The app’s decision tree leads to different sets of .pdf reports.


They worked with the Department of Justice division that supports the ADA.  They heard that the disabled user community would not necessarily have sophisticated technology, and would also might need to use screen readers. They tried to make the app simple and easy to use.
I really value the team's attempt to make the app about disability rights particularly accessible. I think they may have bitten off more than they could chew by addressing needs of individuals (potential claimants) AND businesses (potential defendants). This app has very broad potential applicationn.
Alaskan Native Child Welfare Assistance


The app addresses the extensive removal of Alaskan Native children from their families, with frequent placement away from Native Alaskan families.The focus of the app was on the tribal representative needs rather than the individuals opposing removal in a particular case.
The challenge is that most tribes can’t afford a lawyer.  Many of them are located thousands of miles away from their tribe.  Yet the tribe has the right to intervene in state court child removal cases,

and has a right to a guardian ad litem who knows about a specific Native Alaskan tribe. The app provides information about particular removal situations and also yes/no answers about tribal and individuals rights, for instance, that the tribe can participate telephonically in removal hearing even if the representative can’t be there in person.
This app had a very interesting targeted focus and use-case; I have some experience with child protective work, and appreciate the attempt to provide more information to tribes, who have needs that apparently are not being properly addressed, leading to injustice and loss of tribal integrity.  The outcome of the app seemed to continue to contain a a fair amount of legal jargon, however, making the resulting information perhaps hard to digest.


California Legal Aid / Elder Law
The challenge is the LawHelpCA.org web site, which has a ton of information, is not easy for users who may not understand legal terminology (such as “capacity.”).


They use four different approaches to showing information. The app contains plain language descriptions of aspects of California elder law. It provides pieces of information to the users depending on their answers about their situations.
The team saw their app as a "proof of concept", and clearly spelled out how the app could be further developed and expanded.
A user could (in the future) indicate if she was simply interested in learning more about, for instance, in-home care, or could indicate that they need specific questions.

I especially appreciated this team's focus on what it could effectively accomplish within the time and resource limits that they had, and the way they structured the work they did with an eye towards potential expansion.  That's often the way apps like these might get started in the "real world" (see Minimum Viable Product).


Disaster Assistance & Recovery Tool (DART)
This app addresses needs of hurricane and flood survivors to access the many different resources and help that can help them. A secondary user is Lone Star Legal Aid.

Their goal was to simplify legalese, keeping the language to a sixth-grade level, and also have it available either in a mobile form or via PC browser.


The app helps find disaster assistance resources and apply for loans.
They wanted to make the app user friendly, provide guidance, tell users how to avoid pitfalls, and educate them. User-friendly to them meant very few questions on a page, with a yes-no question response leading to an additional question on the same page.

They leveraged an expert’s knowledge of what people commonly get wrong to provide tips and links to forms along with deadline warnings.  Answers led to a list of types of eligibility, along with a set of next steps, application forms, and a .pdf download.

The app contains four separate decision trees for eligibility determinations. They hope it can be expanded beyond hurricane and flood disasters, and also to other states.

This was the winning app, according to the judges.  I concur that DART did a great job focusing on a needy population and delivering targeted, well-designed help.


Transnational Anti-corruption Advisor
This app represents the first attempt in Iron Tech Lawyer to work with foreign law or with an international law firm.


A4ID “Advocates for International Development:  Lawyers Eradicating Poverty” was their partner / client.
The app allows users to assess whether they have or are about to violate the US Foreign Corrupt Practices Act or the UK counterpart the United Kingdom Bribert Act of 2010. They had to blend two sets of laws, and faced users who may not be familiar with the US or UK legal systems. Cultural expectations might differ also between US/UK and international users.


They wanted to make the app simple to use, and easy to extend. They used short subheadings, and integrated definitions of key terms.
They broke down the law into 9 small decision trees.


Veterans Benefits Disability Advisor
The team was shocked to find that there are 3.5 million disabled veterans in the US, constituting over 15% of all veterans.  They worked with the Bob Parsons Veterans Advocacy Clinic.


Veteran’s benefits law is a very tangled web. Many veterans could have been better served in going through the benefits acquisition process if they worked with a veteran’s services organization.
The application helps with several specific processes, such as obtaining medical records or determining discharge status.

Being there was better than observing on the web, particularly in giving a better perspective on the presentation skills of the different teams.  The Iron Tech Lawyer competition and class continues to give law students a great perspective and actual experience on what it is like to apply legal technology to solve real-world problems.
Posted by Unknown at 11:45 AM No comments: