The week of March 11-15 2013 I traveled to Sidney, Australia to speak at the Ark Conference titled "Advancing Knowledge Management in the Legal Profession" as a guest of that organization.

Needless to say I also took the opportunity to investigate Sidney and its amazing surroundings.


To do full justice to the trip would require greater length than I have here.  I'll instead cover some professional, touristic, and personal highlights.  Some of this information was previously shared on an internal web site, though no endorsement by my firm has been supplied.


My two presentations were well received. I spoke on a panel about encouraging communication inside law firms through social collaboration (I note that the larger firms in Australia seem considerably far ahead of US firms in this area). I also spoke on my own about the many ways in which knowledge management can support pricing and budgeting, and the types of information and information management that pricing and budgeting efforts require. The Australian knowledge managers at the conference were particularly invested in this area of work. I also enjoyed separate meetings with several colleagues from firms such as Ashurst and King & Wood Mallesons, sophisticated firms that due to recent mergers are larger than my firm (Goodwin Procter.)


I was very glad of the opportunity to meet people in the Australian legal KM community face-to-face.  I've met a few people at ILTA conferences, and have been generally impressed with the state of legal KM technology and adoption, as presented by those people in various sessions.


The Australian economy is quite strong; it has been exporting vast quantities of commodities, primarily minerals, to the growing economies of the Pacific Rim and South Asia. (Recent commodities price drops are a potential challenge, however). The exports have greatly increased the strength of the Australian dollar, and also led to significant growth in the western part of Australia where these commodities are extracted. The impact on the Australian legal market has been twofold; not surprisingly, firms that may have only had offices in Sydney and Melbourne have opened offices in Perth and other western Australian cities; and, a wave of mergers between Australian and international firms has also occurred.


Legal knowledge management as a field is doing well Down Under. Australia adheres to the "Practice Support Lawyer" model, in which experienced attorneys embedded in practice groups devote themselves to knowledge management, as well as client development through activities like client alerts and pitches.  Legal KM practitioners have obtained varying but quite high levels of support within their organizations--for instance, one presentation at the conference addressed one practitioner's success in obtaining billable-hour-equivalent status for km work.  I have already mentioned the advanced state of KM at some of the larger firms.  With the relative strength of the legal industry and the PSL model, there are comparatively large numbers of knowledge managers, from surprisingly small firms; one conference participant had flown in from Western Australia from her firm of less than 80 attorneys.


One area of weakness is a comparative lack of formal and informal structures for Australian legal KM attorneys to meet and get to know each other. There are conferences (obviously), but they are rare and did not seem to provide the social opportunities so important for building trust and sharing. 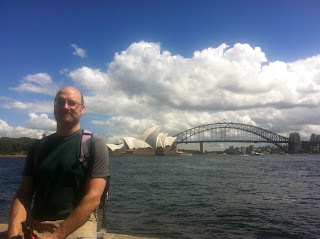 Sidney is the site of one of the most if not the most famous building in the world--the Sidney Opera House. I first encountered it the day I flew into Sidney after a grueling 14-hour flight from San Francisco (and 24 hours of travel). I viewed it from afar, walked up close that day and other days, took the official tour, and to top it all off, attended a wonderful performance of Puccinni's most popular opera "La Boheme" (featured in “Moonstruck”) my last full day there.

The Opera House may be popular and famous, but it is not overhyped. Its setting on a point of land jutting out into Sidney Harbour and in front of the SidneyHarbour Bridge--itself a major landmark on the scale of the Golden Gate Bridge--is spectacular.  The white / tan "sails" take on light and colour from the surroundings while serenely projecting modernism and sophistication; they can resemble barnacles, feeding whales, or schooner sails, and look different from every angle and at every time of day.  As a musician, it is  a point of pride that this magnificent building is also a major cultural institution, with *five* performing arts halls, most notably the huge Concert Hall and the surprisingly smaller Opera Hall, and a robust schedule of classical music, modern dance, and children's theater performances.   Definitely one for your "bucket list." 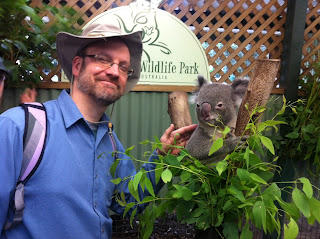 Another highlight was a day trip to the Blue Mountains.  I took a very reasonably-priced tour in a van (with 14 other tourists) to this ecologically unique area, featuring a plateau, rainfalls, a semi-tropical rainforest, and, oddly enough, quaint English-style garden villages.  Australia has utterly unique wildlife, and a 50,000 year-old aboriginal culture, both of which I got to see up close (see this and this).  As an ecologist's son, I would have liked to spend more time in the rain forest, but we had some older folk with us and that was not to be.  Next time.


A major feature of my personal life (OK, OK, "hobby") is extensive experience as a classical chamber musician, performing and playing on violin and viola. I tapped into some existing connections to the Sidney amateur chamber music scene, and also used the "Chamber Music Network" to set up two string quartet sessions with local musicians after the conference.


Playing string quartets at a high level is like re-creating a transient work of art, and usually is a bonding experience. These sessions did in fact give me a chance to get to know people such as a math professor (viola), a sewing shop manager (viola and cello), and a Sidney Harbour Park naturalist (cello), as well as enjoy reading through Beethoven, Mendelssohn, and Haydn quartets.  I'm not antisocial, but neither am I the type of person that can walk into a bar and get to know people quickly, so it was great to be able to meet Australians I already have a lot in common with and make some music at the same time.

The trip as a whole was marvelous and thought-provoking. It felt like a once-in-a-lifetime event, but I would do it again in a heartbeat, perhaps next time with family along. 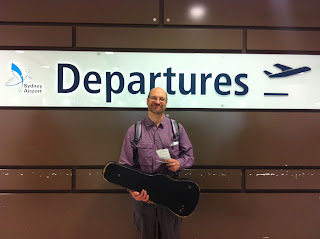